My Mum had just left after a short visit to the farm. I was left with so many lovely memories from her stay here and looking forward to her next visit. Mum was worried about her journey home as the weather forecast predicted heavy snow fall across the UK and Ireland. Thankfully, she got home safe and sound before the first snowflake arrived. I was hoping that the spring had arrived as we were keen to start planting in our new Polly Tunnel but once again the weather had other ideas.

The snow came, stuck to the ground and froze. It was bloomin freezing…literally. -3 with a wind chill of -11. However, we stayed positive as we could see from the news and facebook that other parts of the country had it much worse than us. Since moving here, I have been determined to see the positives in everything… I have been severely tested on this by Mother Nature and I am expecting my Degree (with commendation) to arrive in the post!!!!!

We got the fire wood ready, shopping in (minus the bread: seems to be a shortage of bread, where on earth did it all go) and decided to use the ‘snow days’ to chill (see what I did there). We got a lovely visit from the lady down the way. This is the lady that spooked me on our first meeting as she waved enthusiastically through the window, in the dark with her head torch on full beam. She came to check how we were doing and handed me a bunch of daffodils she had growing in the garden. “Shame to have them go to waste” she said. I couldn’t resist giving her a big hug as I thanked her. As she walked down the path she spoke about all the “drama about nothing with the weather”. I agreed politely and closed the door, welcoming the heat of my kitchen. 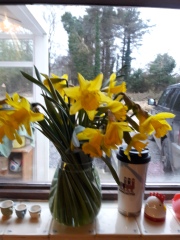 I found my vase and went to fill it with water as I admired the flowers. I turned the tap on and the water kind of trickled out slowly, then became more like a drip until, nothing… “STUUUAAART” I shouted! I broke the news to him. Seems the frost got the better of the pipes. No water!!!

Family meeting; Stuart confirmed that we didn’t have any water, which meant using the little water we had harvested until he could get some more from somewhere.  I remained positive, we can do this, right? Stress makes me need to wee, always has. As I approached the toilet Stuart announced that the new rule was “If it’s yellow let it mellow, if its brown flush it down”. His words seemed to slow down as I suddenly had a flashback of T in the Park Festival. There I was, standing in the porter loo, desperate for the loo and greeted with a smearing of all kinds on the walls, on the seat and on the floor. Hadn’t been flushed all weekend. I seriously learnt how to squat during that festival. I snapped out of it; with a cold sweat, I looked up at our bathroom ceiling. The still plastered ceiling from the tree fall on the roof earlier in winter was a reassuring sign that I was home and not in that ‘communal poo box’. See I’m being positive.

Our lovely farming friend loaned us two 5 gallon barrels and let us use his water from the tap outside his house. So, this was our supply sorted. We managed to heat the water on the Stanley as the fire was on anyway. Still had to ration the toilet flush and had no shower, but we tried to remain positive (through gritted teeth). We used this same water for the animals too. They were all tucked up in the stables. We had to check the water several times a day as it froze over really quickly. Our bedroom windows froze both inside and outside. Although, I was reminded by my mum that this happened all the time when she was a kid. Oh, how it was to live in the ‘olden days’ (she will kill me for that).

Day One – Feeling Positive, we can do this.

Day Two – The novelty wearing off a bit now

Day Four – Had a shower at a friend’s house, positivity starting to wobble

The snow melted, temperatures raised to above freezing and everything was looking back to normal. Except for our water situation. Someone suggested we get a had pump, to pump out any air locks that may have occurred during the big freeze. We borrowed one from another friend. It didn’t work. It would make the right noises, fill us with hope, then simply stop…. Panic began to set in as we considered the potential cost of sorting this. That night we all sat in silence as we individually pondered over this move.

Next day I was back at work. Feeling tired, emotional and totally fed up. Work was a great distraction though.

On my way home, I saw two magpies. It’s funny, if I ever see one magpie, I franticly look around for another one to make it ‘two for joy’, and when that fails, I tell myself to stop being stupid, how does seeing one magpie signify sorrow. But, if I see two. That totally means joy, why wouldn’t it!

I drove up our lane and feeling rather sorry for myself. I see Stuart and his mate, Tim, looking rather pleased with themselves. Like two school boys getting the Head Teachers Award. “We done it” Stuart declared. I must say, I am rather impressed with their ability to ‘think outside the box’ and most definitely deserve a Blue Peter Badge. They used a 30euro hoover (Tims), removed the part that collects the dirt, used tape to attach a plastic bottle and fixed this onto the pipe near the cottage. After about an hour of ‘pipe hoovering’ we had water. I hysterically hugged them both as a thank you and I silently thanked the two magpies, I drove past earlier.

Toilets flushed and shower on, life really is an adventure isn’t it.